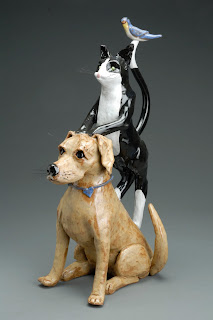 Well I've gotten behind on posting to my blog so I'm going to do an update of the last month. My show, Animal Art, opened last Friday at the John O'Lague Gallery in Hayward. It's in the City Hall building on B Street in Hayward, CA. This is the first time I've shown only animal sculptures. It will run until July 23rd. I also have 2 totem poles back at the Christensen-Heller Gallery in Oakland, CA. It's nice to be back there again!
After the success of 'Behind the Garden Wall' I've been held over at Dimensions Galleria in Petaluma, CA. They will continue to show both my totem poles and my frog pottery.
Edgewater Gallery in Fort Bragg is hosting a show of artworks by artists from Miasa/Omachi Japan. They have sent over beautiful pieces and it is such a treat to get to enjoy them for the month. The show will run through June.
Posted by Alexis Moyer Pottery at 10:32 AM No comments:

Email ThisBlogThis!Share to TwitterShare to FacebookShare to Pinterest
Newer Posts Older Posts Home
Subscribe to: Posts (Atom)
Influence and Inspiration
My artist friend, Susan Spencer, and I have been working on a project we call 'Influence and Inspiration'. It's kind of like a game of telephone where we pass a message back and forth and watch it change except in this case we are passing artwork to each other.
Susan is a mixed media artist so her works come to me as 'paintings' although they have collaged elements incorporated so one has to look closely to really appreciate all that is going on in each piece. So when I get one of Susan's works I spend some time with it and then when inspiration moves me I make a response piece which is a sculpture of some sort. Once my piece is finished I send it back to Susan and she goes through her process of letting my piece inspire a new one from her. This back and forth continues and it is fascinating and exciting for both of us to see where these pieces take us.

Join My Mailing List
My newsletters feature current events and happenings in my studio as well as letting you know where I will be showing my work.
Also, be sure to visit my website www.AlexisMoyerPottery.com to see examples of my work.

Promote Your Page Too